Every ICT practitioner nightmare in government is the legal team.  Usually very general law education and little ICT specific law training and knowledge.  I always cross my fingers when I push the ICT contract to the legal team that I don’t get questions on any technical term and asked to give the legal implication or some legal-esque probes.  Meanwhile I am looking at the deliverable deadlines at the corner of the eye to deliver this project ‘on time’.

I came across an article that the US government spends 16 billion USD on software licenses and maintenance.  The government in August approved a new federal software policy with the aim to adopting use of open source software and open standards to reduce this bill.  But even more encouraging, use of open source software will encourage innovation in the public sector.  An interesting part is the policy mandates all agencies to release 20% of its custom software code into the code.gov website for free access to the public.

Uganda holds an annual FOSS Conference supported by the National IT Authority and this year held the 7th edition.  The Minister of ICT of Uganda Frank Tumwebaze showed that the Ugandan government spends 40 Million USD annually on software licenses from proprietary companies.  The officials say they are soon approving a FOSS policy for the government.

Bulgaria government passed a FOSS policy and will create a new government agency to enforce the law and set up the public repository. A public registry will track all software projects from inspection to technical specs deliverables and subsequent control.

According to the map below (Source: fossbytes.com) only 4 countries have open source policy encourage not mandated: South Africa, Tanzania, Tunisia and Benin.  Only 1 country Ghana has an open source law proposed but not enacted. Perhaps the fact that E-government has not really taken off and hence have not met with the software license and maintenance bills of more developed countries is partly why FOSS in government is not an issue yet.  Obviously this presents a big lessons learned for the governments to adopt FOSS policies now rather that when faced with a huge software maintenance bill. 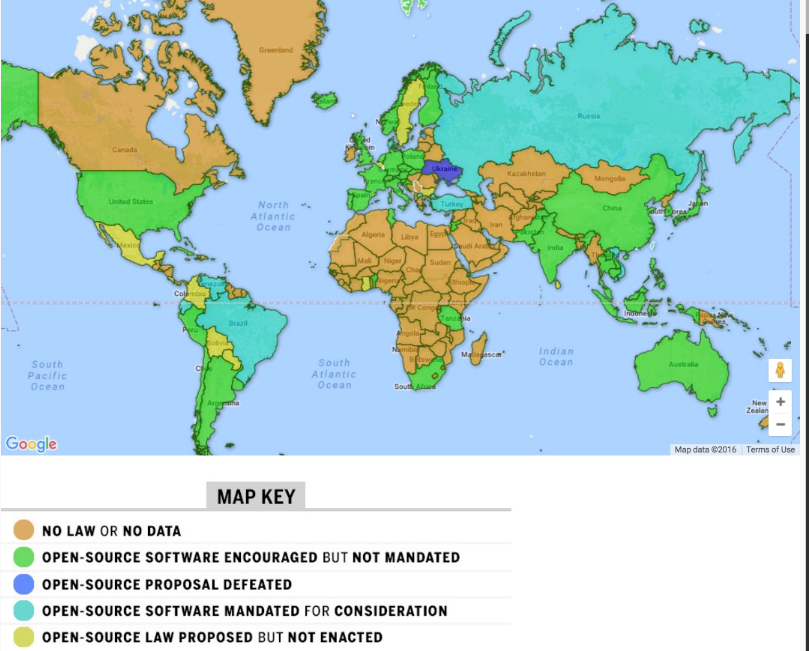 The rhetorical question is therefore, should we wait for the 5o or so African governments go through the costly lessons learned cycle in avoiding proprietary software?

The best interventions is when national ICT polices are being formulated where FOSS policy is mainstreamed into the ICT Policy.  However the (very keen) presence of vendors in the ICT policy consultations (especially with behind the scenes lobbying) makes FOSS policy adoption chances quite slim in Africa.