One of my earliest memories of my working class father, was him hauling home this box-file on a regular basis and then proceed to pore over the contents.  We were forbidden to touch it (with grimy fingers) in case we messed up the order of the papers and the hallowed contents within.  A little while later, my dad took me to an office and I still recall the smell of papers everywhere.  A few years later, I trooped to a government office to get my national ID right in the middle of shelves and shelves of paper, and the musty paper smell.  Now, trooping to the national ID office, one is met with a computer and the musty paper smell is now long gone.

Rwanda National Commission for the fight against Genocide (http://gacaca.rw/)  announced this week that it will be completing its digitization project of 63 Million pages by 2018 at a cost of 5 Billion RWF (6 million USD). This does not include other materials including CD’s, video cassettes etc. The archived documents will be on Islandora an open source digital repository system. 20% of the materials has been digitized so far. 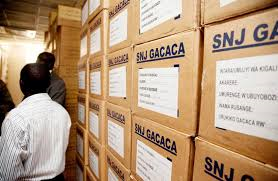 South Africa Government announced it will be digitizing its own civil records of 286 Million records at a cost of 700,000 USD.  Kenya News Agency will be digitization its own photographic library with a portal at Uriithi.go.ke.  The Civil registration department has already digitized 62.5 Million records so far.  The United Nations digitization program as of September 2016 had digitized 400,000 documents which is 13.3% of important documents needing urgent digitization.

Canada’s Minister of Works and Public services has a freely available Guide for managers planning and implementing digitization projects http://canada.pch.gc.ca/eng/1443108514288 .  It gives a breakdown on

For African governments though, with weak in-house teams, outsourcing digitization projects through a competitive procurement process is a double-edged sword.  Creating jobs is inevitable while closing this multi-year projects in as short time as possible.

Given the magnitude of government archives in Africa governments,  a good approach would be to consolidate the efforts around core sectors like health, agriculture etc rather than individual institutions doing this.  This will attract bigger players to the project, which brings in innovations and efficiency.  Care has to be taken to ensure during the procurement process that as much of the labor is outsourced locally, but also the high value skills like development, workflow designs are also carried out locally.

For now, every time I think digitization, that old musty paper smell inevitably comes to mind and with that some of the memories of a rapidly disappearing era of paper.